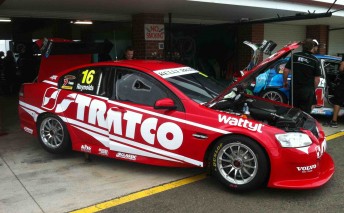 The Stratco Commodore VE has been given a brighter lick of paint for the 2011 V8 Supercars Championship.

The #16 Kelly Racing entry, to be driven by David Reynolds, will compete in a brighter red than last year’s Stratco car.

The Stratco Commodore is the chassis that Rick Kelly competed in Jack Daniel’s colours last season.

Ahead of today’s Eastern Creek test, team engineer James Small predicts that Reynolds will be competitive this season.

“Dave was very competitive in our last test at Winton – he was the quickest of everyone there – so there’s no reason why he can’t be in the leading group.” Other cars that have broken cover include Jason Bargwanna’s Brad Jones Racing Commodore, which has no livery – only BOC and other sponsor signage.

Dick Johnson Racing will be on track with ‘The Team’ logos. Due to strict alcohol advertising limitations in the Middle East, the DJR Falcons won’t carry Jim Beam branding.

The test starts at 9am this morning.