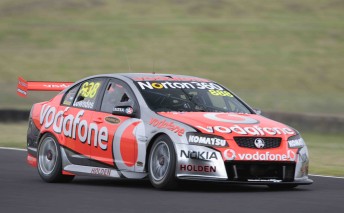 Craig Lowndes has ended the inaugural pre-season Eastern Creek test day on top of the pile, after a blistering lap on Sprint Tyres in the afternoon session.

Jason Bright was third fastest, while Jason Richards also enjoyed a second behind the wheel of the BOC Commodore during the afternoon.

At the end of the day, Lowndes said he was surprised to have emerged with the fastest time.

“It’s nice to be back in the car. To do the time we’ve done is pretty surprising actually,” he said.

“We didn’t struggle, but we didn’t know where our true pace was. Then we put on some soft tyres and away we went – and the car just hooked up unbelievably.

“I didn’t know whether the dash was lying to me but when the lap time came up it was pretty special. It’s nice to have speed but it’s a track we don’t race at.

“I’m really looking forward to Abu Dhabi. We had a good run there last year, we had a one-two with the team with the first time we had the Holdens out running.

“We’ve got good memories of the circuit and hopefully from today we’ve got a lot of good information now to carry on.

“We’ve got to start the season off a lot better than we’ve done in the past. The last three years we’ve generally played catch-up mid-season and we’ve always caught up but never got across the line.

“If we maintain the momentum from the end of last year into this year I think it will be a good year.”

Soft tyres were allowed from 2pm onwards. With no new soft tyres allocated, the times generally reflect the condition of the Sprint Tyres that each driver had available.

Prior to 2pm, Shane van Gisbergen had led the afternoon session, ahead of James Courtney, Karl Reindler, Garth Tander and Rick Kelly.