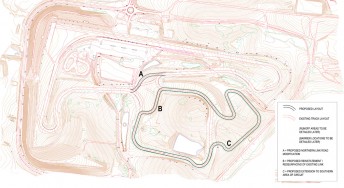 Eastern Creek Raceway is set for a major upgrade.

Announced this morning as a part of V8 Supercars pre-season test day at the venue, the NSW State government has pledged $7 million to the circuit.

Along with $2 million from The Australian Racing Drivers Club, the money will enable an increase of the circuit’s capacity – with four track layouts a part of the plans.

A second pit-lane will also be constructed, allowing two of the circuit configurations to be used simultaneously.

The announcement is positive news for NSW motorsport, after the loss of Oran Park Raceway in early 2010.

ARDC Club President Andrew Leithhead thanked the Government for its investment in the facility – noting the diverse uses of the circuit.

“This investment by the government will allow the ARDC to expand the capacity of the track to service demand from both club-level motorsport and broader community needs.

“The circuit upgrades will also allow us to service the growing demands for race circuits since the closure of other permanent circuits in Sydney.”

According to an official statement, the upgrades are expected to inject an additional $4 million directly into the local economy and provide 60 full-time jobs during construction.