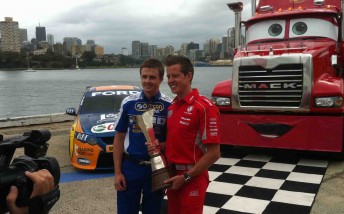 Reigning Champion James Courtney, TeamVodafones’ Jamie Whincup and Craig Lowndes along with Ford Performance Racing pair Mark Winterbottom and Will Davison unveiled the first stage of the Disney partnership in the famous MACK from the famous movie Cars.

It was the first appearance of the life-size MACK transporter, which forms the centrepiece of ‘Radiator Springs’, a mobile themed attraction providing a mix of fun and interactive activities for the entire family.

MACK will make his first public appearance at the pre-season test day at Eastern Creek tomorrow.

The Disney Pixar’s CARS Truck Tour 2011-themed installation features a number of entertainment zones and themed activity stations, providing a whole new level of synergy between the CARS universe and the real world. This live themed installation has been created with a keen focus on engaging families by giving them a unique and immersive experience inside the CARS universe.

FPR’s Winterbottom has been named the official ambassador for the Disney-Pixar Cars Truck Tour.

The Ford star, who along with wife Renee are expecting the birth of their first child in March, is stoked to be involved with the new partnership.

“Anyone with young children knows that Disney Pixar’s CARS is one of the most popular family movies of our time,” said Winterbottom.

“I’m absolutely thrilled to present this world-first, full-scale replica of MACK the Transporter from CARS, built by Mack Trucks Australia.”

V8 Supercars CEO Martin Whitaker said that the partnership is another example of the growing influence that V8 Supercars has.

“To be able to announce this unique partnership is another fantastic news story for V8 Supercars and a tremendous synergy with our mantra of growing our already significant youth audience at our world class events,” he said.

“For the first time ever, Australian Cars fans will have the opportunity to get up close and immerse themselves completely in the Cars universe.”

Today’s media announcement kick-starts the 2011 Championship which begins on the track with the Eastern Creek test day tomorrow before flying to the Yas Marina Circuit in Abu Dhabi for the opening round.

See below for an exclusive Speedcafe.com.au video with V8 Supercars CEO Martin Whitaker …