Thompson and Skaife in frame for FV8 entries

Thompson and Skaife in frame for FV8 entries 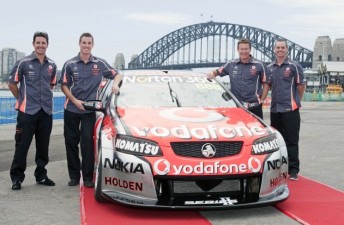 Andrew Thompson and Mark Skaife appear set to compete in either a full-time or limited Fujitsu V8 Supercars Series program with TeamVodafone in 2011.

Thompson, who was confirmed yesterday as Jamie Whincup’s team-mate for the Phillip Island and Bathurst endurance races, is likely to compete in the entire Fujitsu V8 Series.

“At the moment, the only thing I’ve said is that we’ll probably enter a car in the Fujitsu Series,” he said. Craig Lowndes launched the car by performing a spectacular burnout

“Who drives it at the moment is up in the air. I have to get the funding place, but I want to do it.”

Surprisingly, it could be Skaife that gets the opportunity to race in the Fujitsu Series, an idea that he is willing to consider.

“I won’t want to do the whole series, but if there’s a drive at certain points that might help my match fitness at a particular time that suits everybody, I might think about that,” he told Speedcafe.com.au.

“I’m sure Roland has some plans there, but I’ll see what rolls out through the year.”