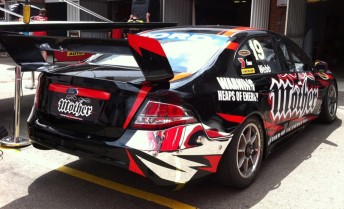 Jonathon Webb’s entry in the 2011 V8 Supercars Championship will be referred to as Mother Energy Drink Racing, as part of a new deal announced today.

The former Fujitsu V8 Supercars Series Champion has moved away from Dick Johnson Racing this year – preparing the #19 Ford Falcon out of his own workshop in Yatla, Queensland.

Webb will continue to run engines sourced from DJR under its new guise Roger Higgins Engines.

The 27-year-old said he is looking forward to representing Coca-Cola’s Mother brand for a second season.

“We’re very pleased to continue our relationship with Coca-Cola and Mother Energy Drink brand and we’re looking to build on the success we achieved last year,” Jonathon said.

“The car looks great and we can’t wait for everyone to see it and to get back on the track and racing.”

“Jonathon did a great job in his rookie year, including an impressive race win at Homebush in difficult conditions,” she said.

“We are delighted to be continuing to support him”.

In addition to supporting Webb, Mother is also an official sponsor of the V8 Supercars Championship.