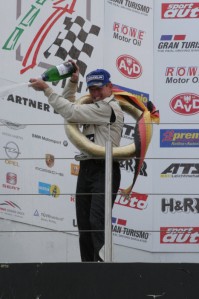 Rodney Forbes shares one of the sport’s better known surnames. His father, Bob, was a well known driver – he was second at Bathurst in 1974 – and owned the now famous 00 Motorsport.

When the son of a sportsman follows in the footsteps of his father many say it is inevitable, but this was not the case with Rodney Forbes. He always had and still has an affinity with the ocean – he was more at home wind surfing or kite boarding – but then later in his life he fell for the adrenaline rush of competitive go-karting.

“My dad was racing when I was young and he owned some teams,” said Rodney Forbes to Speedcafe.com.au

“As a kid I was more into wind surfing, then one day I was out mucking around with some race cars at Eastern Creek and had a good time.

“Down in Wollongong I did it for a couple of years and won some titles, which was pretty good. I was in the Clubman Heavy category which was one of the more competitive classes.”

After go-karting Forbes went on to race Formula Fords. He won the 1997 NSW state championship and the ARDC title and won at Bathurst, where he held the lap record in that category for several years. He also raced GT production cars, coming fourth in the 1998 series.

With go-kart and Formula Ford championships to his name and a good run in the GT series, Forbes turned his attention to V8 Supercars, beginning with Lansvale Racing in 1999.

“Steve Reed and Trevor Ashby gave me my start with Wally Storey as engineer,” said Forbes.

“In (Wayne) Gardner’s old VS Commodore we ran in the Privateer Cup competition as well as being in the points of the main game.

“We won at Bathurst and came second in the Privateers Cup behind Cameron Mclean. Given we were up against the hot shots and their fully sponsored teams, we were pretty competitive.”

In 2000, Forbes raced for Garry Dumbrell in the Wynns Commodore and then changed from Holdens to Fords to race for 00 Motorsport. The 18 months that he was with the team did not provide many happy memories.

“Unfortunately I was the third wheel and rightly so,” said Forbes.

“Everyone was focussed on getting Craig Lowndes to the front. The Lowndes deal came together late so they were rushing to get his car ready, then they decided to do the two car thing with Neil (Crompton).

“They worked it so they eventually got Craig a new car and then I got his, which by then was three or four years old.

“V8s is very difficult to get to the front of, and they did a terrific job to get Craig to the front, but my car was massively old and the equipment was poor.

“It was frustrating. I didn’t enjoy my time in V8s.”

What made his V8 experience so frustrating is that Forbes is actually a very good driver, he proved this when he got the opportunity to drive Lowndes’ car in a test and then later on in his career.

“I never got the opportunity to race a competitive car,” said Forbes.

“When I jumped in Craig’s car I did the fastest time I’d ever done at Winton by 1.5 seconds and was two-10s faster than Craig.

“It was a test and I would never race as good as Craig but it showed that with a good car I could perform.

“It was so frustrating; I was busting my arse in my old car and going no-where through no fault of my own.”

Forbes, with the wisdom that comes with experience, now understands why that period of his life was so tough, but deep down wishes he hadn’t made the move to 00.

“The thing that wrecked my V8 career was switching from Holden to Ford,” said Forbes.

“It seemed like a good idea at the time, but we went from having a reasonably competitive Holden to driving a Ford that most wouldn’t have driven in the Konica Series (now known as the Fujitsu Series).

“I was under a second off the pace and racing for 25th in a four year old car, with old bits and not a great engine. You end up over driving it to get the most out of it which provides room for error and incidents. 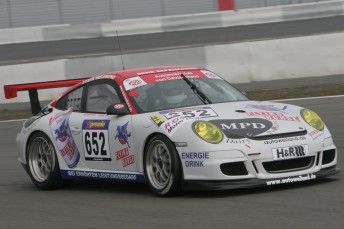 After his V8 stint, Forbes didn’t race for five years. In 2007 he returned to the track racing Porsches in the Carrera Cup, which he did until it folded in 2009. Soon after he made a couple of calls and found himself a drive in the German VLN Series which is a multi-event endurance series held at the famous Nürburgring circuit.

Forbes enjoyed his time racing in the Carrera Cup championship but names the VLN series as his favourite.

“The VLN series is the best I’ve ever done,” said Forbes.

“It’s a ten race series that’s by far the most enjoyable thing I’ve ever done. The level of competition is extremely high, the teams are very good and the cars are competitive.

“My Australian racing career may have ended but my international career is in its prime.

“I live over there between March and November. I have a camper, basically I drive around, see Europe, then go back to the Nürburgring for the races.

“The transient lifestyle is pretty cool. I’m having a great time.”

While many would say he’s living his career highlight now, and Forbes finds it hard to disagree at times, his favourite memory still goes back to Bathurst.

“I came from last and won it in five laps. Wining at Bathurst in the Privateers Cup was also great.

“Obviously it’s rare to get on the podium at Bathurst, so when it happens you tend to remember them.”

Interestingly when asked if he had any regrets or disappointments he immediately said no. Given how his V8 career played out you would have expected to hear a list of angry responses to this question, but he does not; it is obvious he doesn’t have a chip on his shoulder. He now knows why everything happened as it did and he accepts this.

For Forbes, he looks back at his Australian racing career and wishes he’d been accepted more as a driver that could race rather than someone with an open wallet.

“My biggest problem was starting racing so late,” said Forbes.

“I didn’t get the opportunity to build up a background or a reputation.

“I paid my way in for my first drive and people just see you as a paying driver, not a fast or professional driver; that was my biggest down fall.

“In Europe if you are good you can get a drive. Over the last 20 races I was on the podium half the time and was hardly out of the top three.

“I’ve proven myself overseas; I know I can cut it.”

At the moment Forbes is in Australia preparing for the 2011 VLN Series. He spends his time kite boarding and keeping fit.

“The races in Germany are long distance, they are mainly four hour races and there are longer six hour races too, so I need to be focused and fit,” said Forbes.,

“The VLN is a top feeder series, all the factory drivers and big wigs race in my series; the level of competition is outstanding.

“It is a high quality field, with many factory based cars competing. There is lots of passing, you find yourself fighting for position against some of the legends of world motorsport. It’s exciting.”

“You certainly never say never but I am very happy overseas,” said Forbes.

“I have been looking at it but the costs are so high to set up a team here.

“The value for money is not even close, compared to what I do over there.

“I am part of a great team and have good sponsors; I’d be very surprised to see me back.”