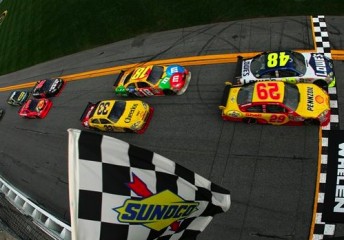 NASCAR aims to increase the rewards for winning races in 2011

NASCAR has made significant changes to its ‘Chase’ format and points system.

While the top 12 points scorers after 26 races have been granted entry into the Chase in recent years, 2011 will see the top 10 go through, with the last two places now classified as ‘wild-cards.’

The ‘wild-cards’ will be awarded to the two drivers with the most race wins throughout the season that finished between 11th and 20th in the points standings.

Bonus points will continue to be handed out at the start of the Chase, now at three points per victory.

According to NASCAR CEO Brian France, the changes have been made in order to increase the reward for winning races.

“The fans tell us that winning matters the most with them, so we’re combining the tradition of consistency in our sport with the excitement that comes along with winning,” he said.

“This makes every race count leading into the 26th race of the season at Richmond, when we set the field for the Chase for the NASCAR Sprint Cup.”

In addition, the new points system will see 43 points awarded to race winners, with each place thereafter decreasing in one-point increments.

Three bonus points will also be awarded to the winner, who can score a total of 48 points when the one-point bonuses for leading a lap and leading the most laps are taken into account.

The changes have been made in order to simplify the system for fans.

NASCAR also announced several other changes for 2011, as detailed below.

Pick a Series: Drivers in all three national series now must select the series where they’ll compete for a driver championship. Drivers still may compete in multiple series and help their teams win owner titles in series where they’re not competing for a driver title. The move helps spotlight young talent in the NASCAR Nationwide and NASCAR Camping World Truck Series.

New Qualifying Procedure: The qualifying order will be set based upon slowest to fastest practice speeds.

Tire Rules Revision: NASCAR Sprint Cup Series teams now are allowed five sets of tires for practice and qualifying instead of six. They must return four of those sets to Goodyear in order to receive their race allotment, and may keep one set of practice/qualifying tires. Tire allotments for race weekends will vary according to historical performance data.

Closed Loop Fueling System: Introduced in the NASCAR Camping World Truck Series, this goes into effect for all three national series in 2011. It combines a more efficient fueling system with the elimination of the catch-can man, considered the most “vulnerable” pit-crew member. Teams now will use six, rather than seven, over-the-wall pit-crew members.