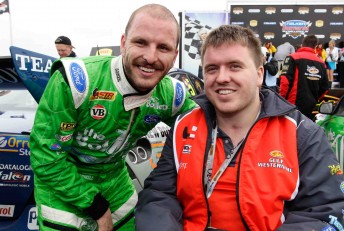 Lucas Dumbrell wants to see his small team expand in the future.

The 21-year-old – the youngest V8 Supercars team owner – says that he’d like to see his single car Gulf Western Oils expanded to more cars and a larger workforce in the coming years.

“With HRT and Triple Eight having 50 plus staff, it’s a totally different world compared to our five staff,” Dumbrell says.

“(The size of) Triple Eight and HRT is where I’d love to end up and be, but you’ve got to start somewhere.”

“A development series car or an Australia GT car would be the next step for us. I want to do more stuff in house too. I want to develop as much of my own intellectual property as I can.”

For more with Dumbrell and his single-car V8 Supercars team, check out the video below …