Mr Jack Daniel may have passed away many years ago, but he is still having an influence on the way his brand is used all around the world.

This year’s the livery of Todd and Rick Kelly Jack Daniel’s Commodores feature the familiar black and white hues, with the famous Jack Daniel’s filigree displayed on the cars for the first time – the sixth consecutive season for Jack Daniel’s in V8 Supercars.

Filigree has featured on the famous black and white Jack Daniel’s label right back to the first batch of Old No 7 in 1866.

Driver and team co-owner Todd Kelly said that linking some of the history of the Jack Daniel’s brand with the car livery made sense following he and brother Rick’s trip to the Jack Daniel’s distillery in Lynchburg, Tennessee last August. A side-on view of the JDR Commodore

“Every year we add a new element to our Jack Daniel’s Racing livery while staying true to what is an awesome colour scheme – black and white,” said Todd Kelly.

“After learning first-hand all of the history and tradition of the Jack Daniel’s brand at the distillery in Lynchburg last year, Rick and I wanted to incorporate the famous filigree from the Jack Daniel’s label into this year’s livery and we are extremely happy with the result.”

After a matte black look in 2010, the Jack Daniel’s Racing livery features a gloss PPG paint this season with flicks of chrome paint.

Marshall Farrer, Managing Director of Brown-Forman Australia, owners of the Jack Daniel’s brand, was excited to unveil the new livery to staff and team partners at the company’s Australian headquarters in Sydney today. 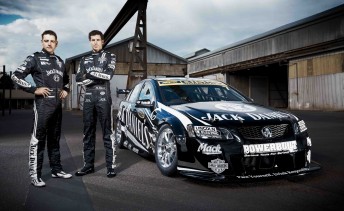 “Todd and Rick have really embraced the heritage and attributes of the Jack Daniel’s brand over the past two seasons,” said Farrer.

“All the staff here at Brown-Forman love the new Jack Daniel’s Racing livery and we are pleased to have the famous Jack Daniel’s filigree as the theme for the cars for the first time.

“Starting your own company and doing things your own way is a massive undertaking – that’s exactly what Mr Jack Daniel did back in 1866 – but we can all see that the hard work of everyone at Kelly Racing is starting to pay off as we enter our third season together.”

Todd and Rick Kelly will be on track in their Jack Daniel’s Commodores tomorrow for an official test day to launch the 2011 season at Eastern Creek Raceway in Sydney, New South Wales.