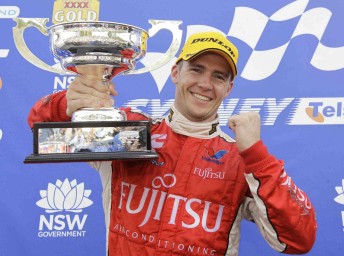 But the GRM cars have a weakness on long, flowing circuits, something that Eastern Creek has in spades.

Holdsworth says that this Saturday’s season launch and test will be the perfect playground for GRM to get its heads around their weaknesses in an attempt to become a genuine championship threat.

“It’s a great opportunity for our team,” Holdsworth told Speedcafe.com.au.

“We only ever test at Winton, so to be able to test at another track is very good. The best thing about it is that Eastern Creek has long, fast flowing corners – a style of circuit that we generally struggle on.

“Out of all the tracks that we race on, long flowing corners don’t suit our cars, so it will be brilliant to be able to test at Eastern Creek. We’ll be changing our car set-ups dramatically over the day and hopefully be able to get on top of a few things.

“And I think it will be great to have the whole field there. You’ll have an idea of the pace that people have found over the off season.”

While there’s no championship points on offer at Eastern Creek this year, Holdsworth says that they can still find gains for other circuits. He picks out Phillip Island as the track that they can benefit most for.

“The track that Eastern Creek is most similar to is Phillip Island,” he said.

“Of the other tracks, you’d probably think that we’ll get some good information for Albert Park, Queensland Raceway and Darwin. There’s a few tracks that Eastern Creek relates to and I think this weekend’s test is going to help our results during the year.

“We don’t seem to have a problem on street-style circuits, but long flowing corners don’t really suit our cars.

“It’s the perfect opportunity for our team to try some new things. At race meetings you don’t go from one end of the spectrum to the other. We’ll be throwing everything at it.”

The test will be held at Eastern Creek this Saturday from 9am to 5pm. Entry is free, with a grid walk at 12.30pm for fans to get up close and personal with the new liveries and driver combinations for the 2011 V8 Supercars Championship.

And speaking of new liveries, Pepsi Max will unveil its entry into V8 Supercars today in Sydney at 9.30am. Stay tuned to Speecafe.com.au for the first pictures of the car …