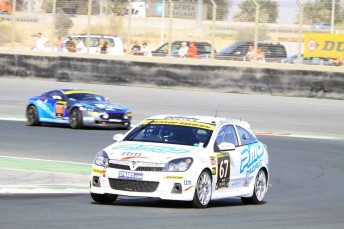 The Miles Racing team-mates are late entrants to the field for next weekend’s race – announcing today that they’ll pair up in the Racer Industries prepared HSV Astra VRX in Class E.

Mostert has battled a severe bout of tonsiilitis this week, but is expected to be fully-recovered in time for the race.

“Any opportunity you get to have a drive at Bathurst you grab with both hands,” said Mostert, who starred in a one-off Fujitsu Series appearance at the circuit last year.

“It’s all been a bit last minute but thanks to Wayne Miles (owner, Miles Racing), I have another opportunity to get some k’s under my belt at the country’s best circuit.”

The Bathurst 12-hour will also realise a dream for Mostert, when he races against five-time Bathurst 1000 winner Craig Lowndes – who enters the race in a factory prepared Audi R8 GT3 Outright car.

“It’s quite strange actually because growing up idolising Craig I never thought I’d actually compete against him – even though he’s in the top class and we’ll be at the other end of the field, the experience will be a good one all the same.,” said Mostert

For Walsh, the 12 Hour will mark his first appearance at Bathurst.

“This is going to be an incredible experience,” he said.

“To race at Bathurst has been a dream of mine since I started racing so to have it come to fruition is awesome.”

Wayne Miles said that the 12 Hour entry is all part of his plan to see Mostert and Walsh progress into the V8 Supercars Championship Series.

“When the chance came up to put Ash and Chaz into a car next weekend I jumped on it because I know how hard it is as a younger racer to get miles at Bathurst,” he said.

“We are investing a lot of resources into developing these guys to be serious V8 Supercar championship contenders one day and this is just the first of many opportunities.”