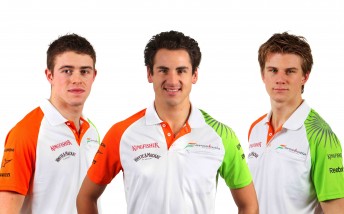 The Force India Formula 1 Team has finally confirmed that Paul di Resta will race for the team alongside Adrian Sutil in 2011.

Di Resta served as the team’s test driver last season, in addition to winning the DTM Championship with Mercedes.

The 24 year old Scot hasd been rumoured to be replacing Tonio Liuzzi for some months, and said he was delighted with the confirmation.

‘Naturally I am thrilled to be making my race debut this season,” he said.

“Becoming an F1 driver has been a long-held ambition of mine, something I’ve wanted to do since I first stepped into a kart, and to finally realise it feels amazing.

“I’ve worked really hard for this opportunity throughout my career and to get it with Force India, a young team that’s got ambitions as big as mine, is genuinely exciting. I can’t wait to be on the grid in Bahrain, it can’t come soon enough.”

“I am genuinely excited by the drivers we will be fielding in 2011,” he said.

“I believe that the combination of talent we’ve assembled gives us one of the strongest line-ups on the grid.

“Adrian has matured into one of F1’s most consistent and highly-rated young drivers, while Paul is, I believe, a real star of the future.

“He has won in every category in his career and this base speed was in evidence when he got in the car on Fridays last year.

“Together I think they are a formidable partnership and will help take us to the next level of performance.”

A statement from Force India also confirmed that ex-Williams driver, and 2009 GP2 Champion, Nico Hulkenberg, will replace di Resta in the role of test driver.