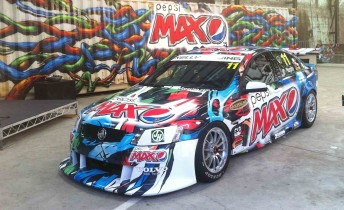 Pepsi has unveiled its entry into V8 Supercars in Sydney today, revealing Greg Murphy and Kelly Racing as its combination for the 2011 V8 Championship.

Murphy will drive the #11 Pepsi Max Crew Commodore VE. It will be the first time since 2000 that Murphy has competed in the V8s without his trademark #51.

The colour scheme of the car, featuring a white pearl look with ‘graffiti art’ adorning its flanks, will change a number of times over the course of the season.

The artwork on the car has been penned by designer Cameron Smith.

Murphy and the Pepsi Max Crew will be on track for the first time this Saturday in V8 Supercars’ official test at Eastern Creek.

CLICK HERE for more from the Pepsi Max Crew launch