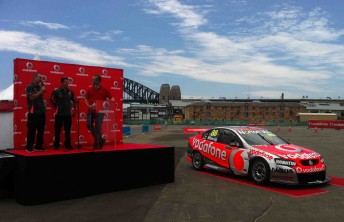 The 2011 TeamVodafone Commodore at today's launch

TeamVodafone has officially revealed its look and endurance co-drivers for the 2011 V8 Supercars Championship.

Andrew Thompson and Mark Skaife will line-up alongside regular drivers Jamie Whincup and Craig Lowndes at Phillip Island and Bathurst.

Skaife returns to the team after stepping out of the Channel 7 commentary box to win both endurance races alongside Craig Lowndes last season.

Thompson, who spent 2010 in a full-time drive with Walkinshaw Racing, will race alongside Whincup in his fourth Bathurst 1000 start. 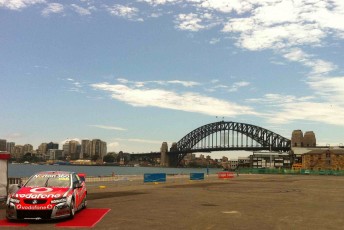 Sydney provided a spectacular setting for the TeamVodafone launch

The livery, pictured, was launched in Sydney today, as part of a Vodafone promotion that saw one of the team’s race cars complete laps of a specially designed water-front circuit.

Those taken for hotlaps included successful bidders from the team’s online auction, raising money for the Queensland flood victims.

Selected members of the media, including Nine Network personality Ken Sutcliffe, also joined in the festivities.