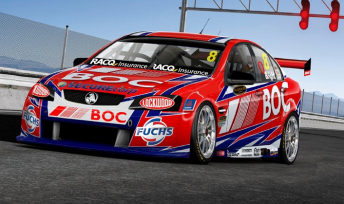 The first image of Jason Bright’s 2011 V8 Supercars Championship contender has been revealed.

Replacing Bright in the #14 entry will be former Kelly Racing driver Jason Bargwanna.

The 38-year-old will have his first drive of a BJR Commodore at this weekend’s pre-season test at Eastern Creek Raceway with the car in plain-white livery.

Bargwanna said he is looking forward to joining the Albury-based squad.

“I’ve always admired Brad and Kim for what they’ve tried to achieve over the years,” he said.

“They’re racers, just like me, and I’ve tried to drive one of their cars on more than one occasion. Now it’s just worked out for the best for everybody.

“I spent a number of races last year trying to work out how to pass one of their cars so it’s pretty obvious they’ve got their act together and Brighty’s results in the last half of 2010 proved that this year is going to be a big one for BJR.

“There’s no doubt that it’s always challenging when you come into a new team – you’ve got to build relationships and understand how they like to do things.

“But you’ve got to think that 15 years’ experience in V8s has got to count for something! Hopefully I’ll be up to speed fairly quickly.”

Bright and Bargwanna both made their V8 Supercars Championship debuts in 1998, having competed against each other previously in Formula Ford and Formula Holden.

“We’re definitely the reddest Holden out there – we’ve got more red now than the factory Holden team!” said Bright.

“It’s always great seeing the new liveries come out and so far I’ve not seen one better than ours; I’m really pleased with it. It all looks like it sits together very well.

“I’m confident that we’ve got a car that will be competitive on all different circuits now.

“We were very competitive for the second half of the year on many different tracks and that competitiveness improved over the last couple of races, Tassie through to Homebush. We should definitely be able to start off the year very strong.”