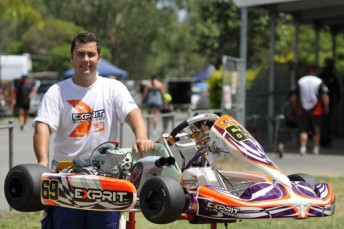 With the opening event on the Rotax Pro Tour only days away and round one of the CIK Stars of Karting Series being held next month, Australia’s top karters have been taking to the track for valuable testing.

With many drivers making a change in chassis brand there will be some unfamiliar sights on the tracks across the country.

William Yarwood is one of the biggest names to be changing colours, after ten years of competing at the top level in an Australian-made Arrow chassis he will make his racing debut in the IKD-imported Exprit chassis.

Yarwood spent both days at Ipswich last weekend testing both the Rotax and Pro Gearbox machines.

“The Rotax kart didn’t take as much to get used to, but the Gearbox is very different – it’s like a whole new ball game. I ended up leaving that to one side for Sunday so I could concentrate on my Rotax machine ahead of the Rotax Pro Tour event this weekend in Melbourne.”

Troy Bretherton spent the weekend ironing out the bugs on his new Arrow X1E ahead of this weekend’s Rotax Pro Tour opener, as did Tyler Greenbury in his Intrepids that he will use across the Clubman, Rotax and Pro Gearbox categories in 2011.

Also at Ipswich on the weekend was last year’s CIK Stars of Karting Series runner-up in the Pro Gearbox category Kel Treseder along with Brendan Nelson and young guns Chris Hays and Hayden Jackson.

It is understood many other CIK Stars of Karting Series competitors will complete a test day at Melbourne’s Todd Road on February 6 while others will compete at the Brian Farley Memorial on the same day at Sydney’s Eastern Creek.