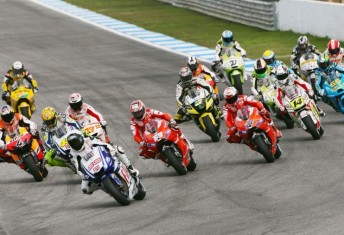 The MotoGP grid will look significantly different in 2011

The FIM has announced the provisional grid for the 2011 MotoGP World Championship.

The premier class of motorcycle racing has undergone a significant shake-up in the off-season, with star riders Valentino Rossi and Casey Stoner both moving teams.

Nine-time champion Rossi moves from Yamaha to Ducati, where he replaces the Honda-bound Stoner.

Rossi’s ride at the factory Yamaha team will be taken by former Tech 3 Yamaha rider Ben Spies, while the 2009 World Superbike Champion will in-turn be replaced by Briton Cal Crutchlow.

Elsewhere in the field, Rizla Suzuki will scale back from two bikes to one, with veteran Italian Loris Capirossi leaving the squad to join Randy de Puniet at Pramac Ducati.

Pramac’s 2010 riders, Aleix Espargaro and Mika Kallio will both step back to the Moto2 class.

Joining Crutchlow on the MotoGP’s rookie list in 2011 is Karel Abraham, with the 21-year-old Czech rider securing a satellite Ducati, to be run by Cardion AB Motoracing.

Abraham, the son of the Brno circuit owner of the same name, showed promising form in the final races of the 2010 Moto2 season, after a largely underwhelming five-year stint in the 125 and 250cc classes.

The 2011 MotoGP World Championship kicks off at Qatar on March 20.

See below for the FIM’s provisional 2011 grid