The new warpaint also comes with a new name, with Bundaberg’s ‘Red’ brand being dropped, replaced by Bundy’s mainstay rum. It is the first time that Bundy’s primary brand has competed in Australian motor racing.

The team will be known as Bundaberg Racing in 2011.

One of the minor changes is the number of the entry. This year, the famous ‘Bundy Bear’ celebrates 50 years in existence, with the number representing the mascot birth (1961). 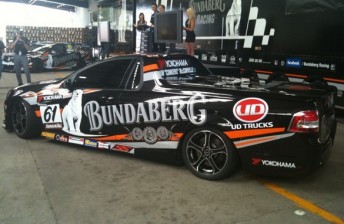 Coulthard will get his first run in the new colour scheme this weekend at Eastern Creek for V8 Supercars’ official test day.

McConville, who was the host of today’s function, will get his first run in his V8 Ute at Winton in a private test ahead of the first round of the Yokohama V8 Ute Series at the Clipsal 500 in Aadelaide (March 17-20).

CLICK HERE for more from the Walkinshaw Racing launch.