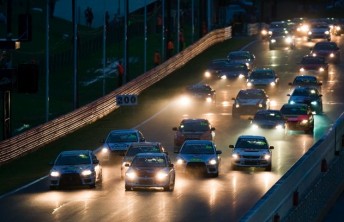 Steven Johnson is set to compete in the 2011 Armor All Bathurst 12 Hour as part of a late entry from Queensland businessman Nathan Tinkler.

While Tinkler ultimately did not complete a deal to buy half of Dick Johnson Racing last season, Steven Johnson and Tinkler are noted friends, and will team up along with production car racer Jeremy Gray for the 12 Hour in an FPV GT.

The FPV will compete in Class D against two Mitsubishi Lancer Evolutions, a Subaru WRX STi, a BMW 335i and a HSV R8.

Other V8 Supercars Championship drivers confirmed for the race include Craig Lowndes, Warren Luff, David Reynolds, Dean Fiore and Steve Owen – who will all race in the GT3 Outright division.

Wall, who will also race in the Fujitsu V8 Supercars Series this season, believes his team is ready to take on the Team Joest Audis early next month.

“We are going into the weekend with one aim – to win the race,” he said.

“It is not going to be easy, especially with the Audi Team Joest and some of Australia’s top drivers competing. I raced against Team Joest last year in Malaysia so I have seen how professional they are. I am keen to race against them again.

“We tested our Wilson Security Porsche at Wakefield Park earlier this week and it felt good. I think we have done everything we can do to prepare and we should have strong package for the race.

“We have always done well at this track so I am hoping we can have a strong finish.”