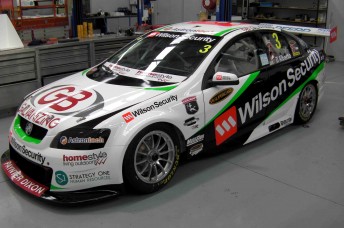 Tony D’Alberto has revealed an interim livery for the start of the 2011 V8 Supercars Championship.

Compete with new backer Wilson Security, D’Alberto has taken the wraps of his Holden Commodore VE that he will compete with in this Saturday’s official test at Eastern Creek, plus the first round of the championship at the Yas Marina Circuit in Abu Dhabi.

It is expected that D’Alberto will switch to an ex-Ford Performance Racing Falcon FG from the Clipsal 500 onwards.

The team has announced that it will unveil its completely new livery at Southern Cross Station, Melbourne, on Friday March 4.

D’Alberto said that launching at the station will bring his team ‘to the people.’

“More than forty-thousand people are in transit through the station during the peak hour period alone, so it’s the perfect stage for Wilson Security Racing to showcase its colours and cars for the 2011 season,” he said.

“I think it’s also important we take V8 Supercars to the people and let them get up close with the cars. To do that on a Friday at Southern Cross Station will be fantastic.”

It was also announced over the weekend that David Wall has joined Tony D’Alberto Racing as its Fujitsu V8 Supercars Series driver. CLICK HERE for that story …