The Toll Holden Racing Team has unveiled its striking colour scheme that it will compete with in the 2011 V8 Supercars Championship. Team drivers James Courtney and Garth Tander took the wraps off the race car today, which features an increased use of red from last season, as well as a black bonnet and roof to complement new support from Rockstar Energy Drink.

The Toll HRT’s famous helmet and lion logo on the flanks has also been given a freshen-up.

Courtney, who signed with the Toll Holden Racing Team at the end of last season, brings with him #1 to the team, courtesy of his championship win last year.  It is the first time since 2008 that a HRT Commodore has competed with #1. 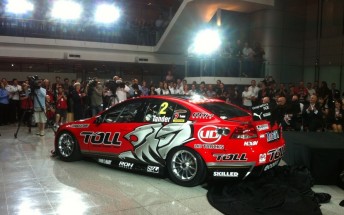 See below for Speedcafe.com.au’s video from today’s launch…