Tander: Toll HRT will improve in 2011

Tander: Toll HRT will improve in 2011 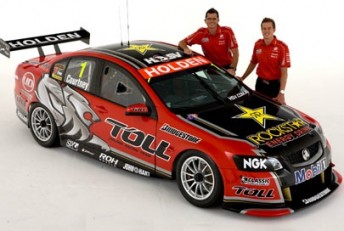 Garth Tander is adamant that the Toll Holden Racing Team will rise to new heights in the 2011 V8 Supercars Championship.

Speaking at the launch of its new black and red livery at Port Melbourne today, Tander wants to lead the factory squad back to the top after a disappointing 2010 season.

“Last year did not deliver the results the Toll HRT had hoped for, but our car showed good speed at times,” he said.

“We now have a challenge of getting the team back to the top where we were in 2009.

“James is a new team-mate, we don’t yet know each other well and haven’t spent a lot of time together in the past, but we are both competitors and we both know the challenge ahead of us. I know we will work well together and fight to get Toll HRT back to the front.

The new-look Toll Holden Racing Team will hit the track for the first time in 2011 this Saturday (January 29) for the official V8 Supercar pre-season test at Sydney’s Eastern Creek Raceway.

The first race in the 2011 International V8 Supercar Championship is the Yas 400 at the Yas Marina Circuit in Abu Dhabi on February 11-12.

See below for Speedcafe.com.au’s video from Toll HRT’s launch today …