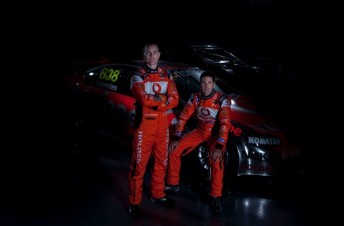 TeamVodafone will unveil its new look in Sydney’s Barangaroo precinct, while also raising funds for Queensland’s flood victims this Thursday.

The champion V8 team will be auctioning off 10 exclusive experiences around Baranagaroo, which is being developed as one of the most ambitious and significant waterfront projects anywhere in the world. The fundraiser event will be part of the team’s official 2011 launch.

This Thursday, the highest bidders will be treated to an exclusive experience with the team on the same day it presents its new livery to media, sponsors and corporate guests.

The lucky bidders will be strapped into the newly-liveried TeamVodafone 2011 Holden V8 Supercar for the experience of a lifetime alongside five-time Bathurst champion Craig Lowndes and two-time title winner Jamie Whincup.

To bid for this amazing prize and support victims of the Queensland floods, visit http://www.teamvodafone.com.au/auctions. The auction begins on Thursday January 20 and ends on Tuesday January 25.

Lowndes sees no better way to raise money for the victims of the floods.

“Putting on the race gear and getting inside a V8 Supercar is a thrilling experience and we’re excited for 10 of our fans to join us and support the victims of the floods,” said Lowndes.

“Like many Australians, Jamie and I have emotional attachments to Queensland and have both been affected by the recent devastating floods. Jamie hails from the Gold Coast whilst I am live in Kilcoy where recent events saw me have to re-locate temporarily as the floods prevented me from getting home.

Team-mate Jamie Whincup added that raising funds for the flood victims was the key point of the team’s launch.

“Everyone at TeamVodafone is keen to support the Premier’s Flood Relief Appeal in any way we can,” he said.

“We’re already off to a great start with the NSW Government contributing $7000 to this fundraiser. We’re very pleased our official 2011 launch has offered us an ideal opportunity to organise an event to raise important funds for the people of Queensland and give racing fans the experience of a lifetime.”

Fans who are not based in or near Sydney can also support TeamVodafone’s fundraising efforts. A host of limited edition memorabilia will be made available for online auction, along with five of the custom-made ‘Support Queensland Floods’ t-shirts the team will available at the pre-season test at Eastern Creek on this Saturday.

TeamVodafone offered a sneak peek of its car last Friday. CLICK HERE for that story …