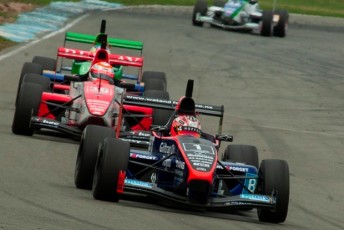 Kiwi teenager Mitch Evans again showed the international drivers the way in Round 2 of the 2011 Toyota Racing Series at Timaru at the weekend.

Evans took pole position by more than 0.5s on Saturday,  before dominating the opening two races.

A third place in the reverse-top six Race 3 ensured Evans maintained his record of a top-three result in each of the six races held so far.

Evans now has a ‘win in hand’ over Englishman Alex Lynn and Australian Scott Pye, who are tied for second in the points standings.

The pair lost valuable points when they tangled in Race 3 – an incident that dropped Pye to seventh and sent Lynn to the pits for a new right-rear tyre.

Earlier in the weekend, Pye had followed Lynn home to be third in Race 1 and fourth in Race 2.

Nick Cassidy starred in Race 2, the Timaru Herald Trophy race, taking second behind Evans – a result which helped the Kiwi to fourth in the championship at the conclusion of the weekend.

Race 3 was eventually won 17-year-old Wellington-native Jamie McNee. The Safety Car had been required at the race’s half-way point after Damon Leitch and Mario Farnbacher made contact and became stranded at the exit of the first corner.

The Toyota Racing Series continues at Hampton Downs from February 3-6.