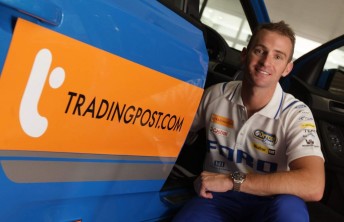 Will Davison says that his new long-term deal with Ford Performance Racing is the start of a new beginning for him after a horror 2010 season.

Announced last week, the 28-year-old has secured a three-year deal with the factory Ford team, ensuring he will be with the team until the end of 2013.

Davison says that after two years with rival factory outfit Toll Holden Racing Team, the time was right to make the switch.

“I’ve feel I’ve jumped on this ship at the right time,” he told Speedcafe.com.au.

“At this time in my career, I wanted long-term stability with a team that I could move forward with, and that wasn’t possible for me at HRT.

“I have been able to reach a much better agreement for me moving forward and much better on paper.

“I have a three year deal, but they way they go about things and the way they work and the way I work, it’s going to suit me there really well. I can see myself here for more than that. This is a much better option for me moving forward.”

Davison’s tenure with the Toll HRT was mixed with success and failures. In 2009, he finished runner-up to Jamie Whincup and ahead of team-mate Garth Tander. Last year, his season couldn’t have been any different, finishing down in a lowly 22nd.

“I thought long and hard as to why the year was disappointing and at the end of the day, it became quite an easy decision for me to leave. I couldn’t see the areas why I was struggling and couldn’t see what had changed in that environment.

“At FPR, I was offered a long term deal with great stability and I was a big part of their plans. And more importantly, it was all about being in the right place at the right time. I think very strongly about where they’re going and they are very clear in their direction. They’ve got some brilliant people there.

“Commercially, it’s very exciting too with Trading Post as our major partner.”

Davison thinks the environment at FPR will suit him better than at his former employment.

“I feel very strongly and confident about where FPR is going,” he said.

“I really think it’s going to be a close environment down there. I feel really at home there already and included in the whole show.

“It’s a great feel and they’re hungrier than anyone else in pitlane at the moment. They’ve set some pretty high goals that they haven’t ticked off and I’m pleased to be part of their long-term plans moving forward.

“There were a lot of great things at HRT and I learnt a lot and don’t regret my time there at all. I finished on good terms, but 2010 was the most frustrating time in my whole racing career for lots and lots of reasons.

“I’m just looking forward to getting out there and proving a point this year. I’ve got a real fire in the belly, I’m hungrier than ever to get back to form after a mystifying year in 2010. I’ve never been more hungry and motivated to get back to where I should be.”

Here Will speaks on Foxsports News