Courtney’s engineer cautious ahead of 2011

Courtney’s engineer cautious ahead of 2011 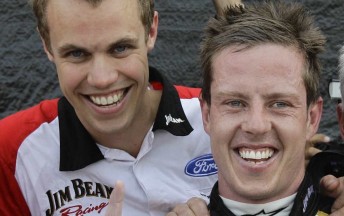 James Courtney’s race engineer Scott Sinclair says that it will take some time to get their heads around their new weapon – the #1 Toll Holden Racing Team Commodore.

After winning last year’s V8 Supercars Championship at Dick Johnson Racing, Courtney and Sinclair have moved to the Toll HRT, and Sinclair says that there will be a number of factors that will determine how quickly they find their feet.

“The Ford and the Holden are widely different beasts,” Sinclair told Speedcafe.com.au.

“I’m looking forward to getting into it. Really, we need to see what James thinks of it before we go anywhere, but there’s no reason why we can’t adopt to what Garth has had.

“We achieved what we wanted to last year where we were, and now we’re on to a new challenge.

“HRT has a great group of guys and they didn’t have the best year by their standards (last year), but I can’t see why we can’t lift that this year.”