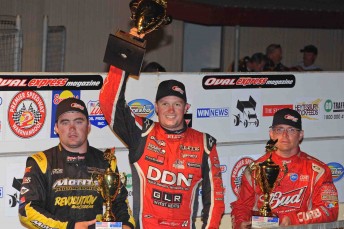 Seemingly en route to upsetting strong USA contingent, Lines led fellow front row occupant Meyers from the start until slapping the Turn 1 fence a dozen laps into the 25-lap event. With a damaged Jacobs ladder the young Mount Gambian fell prey to the two World of Outlaws aces with eight laps remaining; the pair then engaging in an exciting fight for supremacy.

Afterwards Meyers was profuse in his praise of car-owner Steve Caunt, the crew and car saying, “What a way to start the weekend. We were a little tight to begin with until the fuel load began to burn off. It was unfortunate that Lines got into the wall as he was definitely good enough to win.” 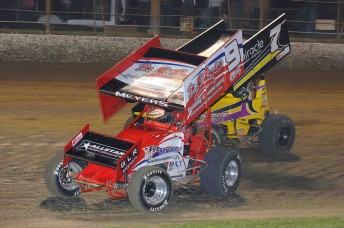 Meyers and Steve Caunt Racing were too strong on Night 1 (pic: Ash Budd)

Saldana rued several mistakes admitting, “The driver was stupid as I definitely had a car god enough to win. Once we put a bigger tyre on for the feature the Kasey Kahne Racing car really came on. I don’t have the patience to run the bottom and the track definitely suited me up top.”

A remorseful Lines lamented, “This was one that got away as being in front of these guys is a dream come true. It would have been nice to win as each time I’ve raced in America these guys have kicked my butt!”

Saldana’s Pennsylvania team mate Cody Darrah rode the ragged edge for fourth while Brooke Tatnell, compelled to transfer via the last chance B-Main, charged through the field from 17th to fifth ahead of six-time Australian champion Garry Brazier and local hero John Vogels. Earlier the massive parochial crowd had been in raptures when veteran Max Dumesny set quickest time in qualifying ahead of Californian Jonathan Allard. 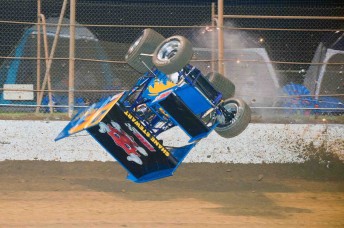 Sunday night’s format consists of another 16 heat races followed by E, D, C and B Feature events culminating in the 40-lap A-Feature.

For  a comprehensive wrap of all the action from the Grand Annual Sprintcar Classic, make sure you pick up a copy of Oval Express magazine – on sale on the first Wednesday of every month.

If you’re not trackside you can watch the action live online by purchasing the live stream here. (Live Stream works on Windows only).

See below for the Preliminary Feature results