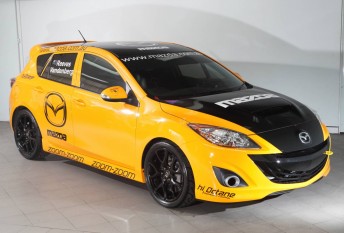 Brendan Reeves will stand out at Targa Wrest Point

Mazda Motorsport has completed an encouraging test session for both the RX-8 SP and Mazda3 MPS ahead of the second round of the Australian Tarmac Championship, the Targa Wrest Point Rally in Hobart on January 29-30.

The Mazda Motorsport team will be seeking redemption after a disappointing result at Targa High Country (November) and signs so far indicate that both cars should again be on the pace.

The Mazda3 MPS has undergone extensive work after being on the wrong end of significant panel damage which ended its dream run at the recent Targa High Country event.

With repairs now completed, the MPS has resurfaced sporting an aggressive new look that is sure to make it one of the most recognisable cars in the field.

Mazda Motorsport boss, Allan Horsley is not known for his conservative approach to motorsport and the new colour scheme on the Mazda3 MPS is further reflection of this.

Keen to build on the pace that he had shown before crashing out at Targa High Country, Brendan Reeves will once again be at the wheel of the Mazda3 MPS.

Rhianon Smyth, his sister and usual co-driver, will be noticeably absent from Targa Wrest Point as she recovers from further medical treatment for a leg injury sustained at Rally SA in 2009.

Reeves, who will also contest six rounds of the World Rally Championship as part of the WRC Academy, will be partnered with experienced Tasmanian Simon Vandenberg at the Targa Wrest Point event.

“It’s unfortunate that Rhianon isn’t able to be beside me for Targa Wrest Point but I’m delighted to have someone of the calibre of Simon calling out the notes for me,” said Reeves.

“His past results speak for themselves and we’re both looking forward to a strong run in Hobart.”

Steve Glenney managed to find even more speed and improved balance in the rotary RX-8, which bodes well for Targa Wrest Point.

“The car was running as well as I’ve ever seen it at Targa High Country, but somehow the team has managed to further refine and improve it,” said Glenney.

“I can’t wait to get it on the tarmac and show the competition what we are really made of.”