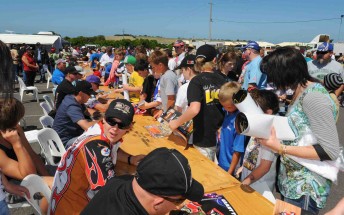 Excitement is building at Warrnnabool’s Premier Speedway ahead of the 39th running of the Grand Annual Sprintcar Classic.

Over 10,000 spectators are expected to take in the first night of action tonight at Australia’s biggest speedway meeting.

The weekend’s action will feature the best of Australian and American speedway racing including the likes of Jason Meyers, Joey Saldana, Craig Dollansky, Jason Sides, Shane Stewart and Garry Brazier.

A total of 92 sprint cars have been entered for the weekend’s racing. 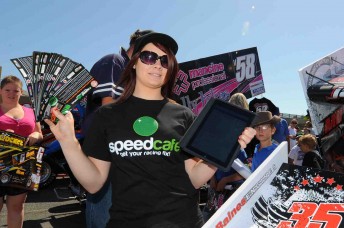 Speedcafe.com.au is on hand giving fans the chance to win an iPad (pic: Ash Budd)

Speedcafe.com.au is proud to be a minor sponsor of the Grand Annual Sprintcar Classic, and is on hand at the Speedway giving fans the chance to win an iPad.

Fans of the site who can’t make it to the track this weekend can also win an iPad by subscribing. CLICK HERE for details.

Stay tuned to Speedcafe.com.au for on-the-ground reports of the racing action brought to you by Oval Express’s Jon Evans.