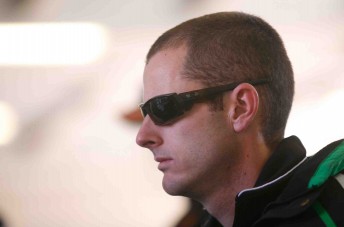 David Wall will step into the Fujitsu Series in 2011

In an announcement made earlier today, TDR confirmed that Wall’s Fujitsu Series entry will run under the same Wilson Security Racing banner as D’Alberto’s Championship car.

The deal sees an extension of Wall’s relationship with Wilson Security, after the company backed his V8 Supercars Championship endurance race debut in 2009, and his victorious 2010 Australian GT Championship campaign.

While yet to be announced, Speedcafe.com.au believes that Wall will race the Walkinshaw Racing-built VE Commodore that D’Alberto has campaigned over the previous three seasons.

D’Alberto is slated to run the car, dubbed WR001, in the opening round of the 2011 International V8 Supercars Championship, before switching to an ex-Ford Performance Racing Falcon for the remainder of the season.

Wall has been on the fringe of the Fujitsu Series in the recent past, competing in GT and Carrera Cup Porsches over the last five seasons, as well as putting in a solid performance alongside Karl Reindler in the 2010 V8 Supercars endurance races.

“It’s a fantastic opportunity and I’m really looking forward to taking the next step in my career,” said Wall of joining TDR.

“I’ve enjoyed racing in the V8 endurance rounds the last couple of years, so stepping into the Fujitsu Series is a natural progression.”

The team confirmed that Paynter Dixon, Astrontech, Payce and Recall will also support the entry, while further details will be released as a part of Wilson Security Racing’s March launch.

Wall, who turned 28 last week, will be hoping to continue the form that TDR showed in its last Fujitsu Series campaign in 2007, when Tony D’Alberto took the series win.