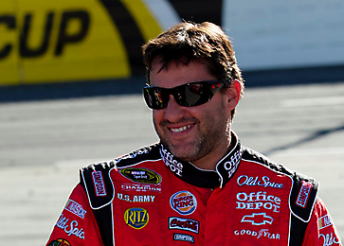 Tony Stewart has broken his silence regarding the off-track incident that saw him questioned by police while in Australia last weekend.

The two-time NASCAR Sprint Cup Series champion was involved in a physical altercation with Sydney Speedway co-owner Brett Morris, where Stewart was competing in Sprintcar competition.

Stewart is now back in the United States preparing for NASCAR’s season-opening Daytona 500.

In the transcript below, Stewart answers questions about the incident at an official NASCAR media conference held at Daytona International Speedway overnight.

QUESTION: Australian newspapers reported that at the end of your trip down there that there was sort some of altercation or something. Can you give us some facts or shed some light on what happened?

TONY STEWART: There was an altercation at the racetrack. It was a dispute between myself and one of the owners of the facility. But as it also reported, we went down to the police station, we gave them a statement. They told us after the statement that we were free to go back to the hotel room and free to get on the plane the next day. But definitely wasn’t the way I wanted to end my trip.

We had a fun trip over there. Obviously there was a lot of flooding and raining while we were there, but at the same time we still… we had a good race trip over there and didn’t end that last night the way we wanted to by any means. But it’s not uncommon to see drivers and track owners have disputes over what’s going on, but this one went a little bit further than a normal dispute.

Q: Can you tell us what you told the police in Australia?

TS: I can’t tell you that, but that’s why they take you there is to talk to you behind closed doors. But the police department was very cordial over there. They were very professional, and we did exactly what they asked us to do and went through that process, and they let us go.

Q: Given how much fun you’ve had in Australia in the past, do you think you’ll go back?

TS: Love to. Like I said, except for the last night we had an excellent trip again.  I mean, that’s the most time that I’ve ever been able to spend at one time, and even though the weather wasn’t very nice it was still a good vacation. I woke up every day not to a ringing telephone, so it was nice to get away on a good vacation, and I still want to go back and still want to go back and race. I’m glad this will be over with soon hopefully.

Q: Do you anticipate that the matter is settled, or is there any concern you might have to go back to answer any further questions?

TS: I’m not concerned about it.  If there is and we have to go back, we’ll deal with it. But it’s nothing that we’re concerned with at this point. I mean, like I said, when they were done with us, they said we were able to go back to the hotel and were able get on our flight and come back. I made sure that they knew exactly where we were staying, when our flight was, what the flight number was and how to get a hold of us the whole time. We’ll deal with it if anything else comes about.

Q: You seem remarkably calm and at peace, and you look good and fit, and yet you had an altercation. What could have possibly led to such a dispute, and talk about your mood and how you’re feeling?

TS: Well, I’m definitely not proud of what happened, and if I had to do it all over again, I would have dealt with it much different. But we had been over there for almost five weeks, and we had been dealing with the same problem with the racetrack, so it wasn’t something that was just one incident that led up to it.  It was a combination of the whole trip. But there was such a dispute on how they were doing a couple different aspects of preparing the racetrack and what it was putting the drivers in the situations that we were put in.

You know, I’ve always been one to speak up for what I think is right, especially when it comes to the safety side of it, and I didn’t think it was the conditions were safe to run on, and they felt differently.

I’m home, and I’m back doing things that are getting my mind off of it, obviously. Like I said, this isn’t something that I’ve blown off. I mean, I’ve lost a lot of sleep over it because I’m very embarrassed that I made it through a whole trip and the night before I come home I get in an altercation with somebody, and that really hasn’t happened for a while.

I’m not at all the least bit proud of it. I’m ashamed about it, but at the same time it’s been nice to get back with the team and it’s nice to come down here and worry about driving the race car again. And it’s not that it’s making me forget about it, but it’s at least getting my mind off of it enough to relax.
And I had a good vacation. That’s the thing. It’s a very relaxing vacation. I felt like I alleviated a lot of stress over there, and like I said, we just had one bad night out of a 30 day trip. I think for the most part the trip was a success.

TS: If it would have been just hot laps then we would have had that option. With the heat race, you get points for your heat race, so if we didn’t go out then we were really digging ourself a hole for the whole night. But the hard thing is it’s not like looking at a pavement track and knowing if it’s dry or if it’s wet.

When you’re dealing with dirt tracks and how much moisture is in a racetrack, you know, there were cars on it previously before we were on it, but we were in a hot lap group that was four sets before our heat race went out, so it was hard for us to know exactly what the conditions were until we got out there. But it was pretty obvious we thought before we even went out there that it wasn’t going to be good.

It was disappointing because it was the best weather conditions they had had leading up to that race, and they found a way to kind of get themselves backed in a corner again.