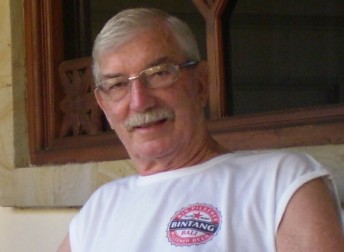 Ivan Stibbard holds a unique position in domestic motorsport. As race director of the Australian Racing Drivers Club, and in other positions within the club, he witnessed the changing face of Australian racing, from series production, through to Group C and Group A and then the start of V8 Supercars.

On admission Stibbard only had two jobs, the first with James Hardie, and the second at the ARDC. He spent 30 years there and was involved directly with some of the biggest Bathurst moments.

He, along with several others, made the call to shorten the 1981 race, which gave the win to Dick Johnson, and the 1992 Bathurst 1000 resulting in Jim Richards famously calling the booing crowd a ‘pack of arseholes’.

In both races an accident stopped the race and the officials determined the race winner by going back a lap, or in 1981, back two laps.

“Going back that lap was the decision,” Ivan Stibbard told Speedcafe.com.au about the 1992 event.

“I was part of the decision making team, as was the clerk of the course and the officials.

“Yes we copped a little bit of flack but they were the rules of the game at the time, you had to go with it.

“But it was good television and great publicity.

“I didn’t see Jim Richards make the ‘arsehole’ comment live, I was out the back somewhere. You probably wouldn’t get away with it now, what with live TV, but he was probably right. It was all good fun.”

Stibbard has been a motorsport fan for as long as he could remember. He used to run his own rally events and his work was always associated with racing.

“I had friends that belonged to church groups, I used to run treasure hunts and rally events, things like that, just social events, so I always had an interest,” said Stibbard.

“I did a bit of rallying 50 years ago, with a couple of the hill district car clubs.

“I navigated for a while and did a little bit of racing, but when I was offered the job at the club that was put on the back burner

He got himself a job at the ARDC courtesy of his friendship with the then vice president.

“The vice president was Dave Dean, he was Sales Manager for James Hardie,” said Stibbard.

“He knew I was interested in the sport. My discussions started in 1967 and my first Bathurst was in 1968. I came in as an understudy to the race secretary.

“In the end I was there for one month short of 30 years.

“The first few years I was assistant secretary; then I took over the race secretary/race manager’s job.

“After my holidays in 1981 I came back and I was made general manager from then on.”

When asked what he enjoyed about the job, he realised it was the people.

“What I’m missing now is the people and the camaraderie,” said Stibbard.

“I never had close friendships with the drivers, they would be better called acquaintances, they were people that you would meet and talk to, but wouldn’t socialise with. I miss that, the people.”

Race day at Bathurst was always a massive day for Stibbard. He’d by up by 3am to get prepared for the day ahead. He’s manage the officials, organise catering for them, he’d be on the radio in constant communication with everyone and kept an eye on the race.

If there was an accident, he would spring into action to clear it so that the race could resume as soon as possible.

“You were always doing something,” said Stibbard.

“I used to keep on the ball, if recovery crews were being slack, you had to jump on them because the race was being broadcast live, they didn’t understand all that.

“I would spend my time in the office so I could keep in contact with everyone.

“If there was a serious accident I’d jump out with the clerk of course and we’d go out and supervise the clean up. At the end of the day you were stuffed.”

The ARDC used to run and control any race that was held at Amaroo Park Raceway and Bathurst. It supplied all the officials, all the volunteers, liaised with the host broadcaster and ran all of the categories racing on the day.

“I used to oversee everything,” said Stibbard.

“We had our own clerks of course from the club.

“I had 1000 officials, everyone was sourced by the club, we had no outside contractors, council did most of the track work, we’d organise the officials, catering and run the track sessions and the race.”

In all of the years that Stibbard ran touring car and endurance events, his favourite administrative moment was when he secured a Group A touring car world championship event, which was held at Bathurst in 1987.

“It felt good to be the first club to run a world championship event,” said Stibbard.

“We applied to run the event , along with Calder Raceway, through CAMS.

“It was a highlight, it was still the best crowd that Bathurst has ever had.

“All the drivers, the money, the expertise and professionalism of the teams made the racing really exciting and it rubbed off on us, making us a lot more professional.”

With Amaroo Park Raceway no longer in use, Stibbard has some very fond memories of the old time permanent race track.

“We used to run touring car events there,” said Stibbard.

“We’d run five events there each year, all were televised live, with the support of eighteen to twenty different categories.

“When you go to the track now you can still see our offices; the rest in housing.

“It’s a shame that our permanent tracks are disappearing. Where are our future racing superstars going to come from? They start out here and then go overseas.

“It’s just the way it is, some will say it’s progress, it’s just a shame.”

Stibbard doesn’t look back with any regrets or disappointments, even though he once got asked to leave the ARDC.

“In ‘86 we were awarded the world championship and the directors borrowed all this money to build the Bathurst pit lane that we had before the current one.

“I thought they were mad; no track in Europe or America had facilities like this.

“After the race they decided they didn’t want me but I had a contract, the club members revolted and threw the board out and I was reinstated.”

Stibbard stayed around for another 10 years before he decided that he’d had enough and retired. He loved his motorsport but admitted that the new V8 Supercars championship wasn’t his “cup of tea”.

After leaving the ARDC Stibbard and his wife bought a small car detailing business and travelled.

“We’ve done a lot of caravanning and camping, so we’ve seen a lot of Australia,” said Stibbard.

“We live in a little complex on the Gold Coast where I am the secretary chairman of the body corporate.

“When Mr Jetstar has a sale on we go to Bali for a few weeks.

“All of these little things keep me busy. I don’t see many people that were involved in the sport, motorsport is all very different now.”

Other than attending a Muscle Car Masters event and a practice session at Queensland Raceway, since leaving the sport in 1997 Stibbard has not been to a race meeting. For Stibbard, motor racing was more exciting during the Group C and A days. He watches the V8s on occasion, but not regularly.

“It lost me with the cars all looking the same,” said Stibbard.

“I watch some of the British Touring Car Championship when I can, those drivers are mad, the German’s are even worse.

“I would have liked to have seen CAMS support the Super Touring Championship.

“I know it was expensive, but there were six or seven makes of cars which, I think, gives more opportunities for sponsorship and increases fan support.

“In  1987 the number of Italians that went to Bathurst to watch the Alfas (Alfa Romeo) was amazing.

“But again, that’s progress. The V8 championship is popular at the moment, it’ll be very interesting to see if it gets more manufacturers. We’ll see.”