Tony Ricciardello will rejoin the Sports Sedan field in 2011

Ricciardello competed with Kelly Racing in his first full-time V8 Supercars drive, but struggled for speed for much of the year – ending the championship in 26th position.

A return to Sports Sedan competition will reunite the 31 year-old with his family team’s iconic Chevrolet V8-powered Alfetta GTV.

The West Australian has won six previous Australian Sports Sedan Series titles in the car, and is looking forward to getting back behind the wheel of the Italian beast this year.

“Even though the series doesn’t kick off till May, the car is pretty much ready to go. “It’s going to be exciting to get back in the car – I’m really looking forward to it.”

Prior to Tony’s move to V8 Supercars, the B&M Ricciardello team was exploring the idea of building a new Sports Sedan – with rumours circulating that the proudly Italian family would campaign a Ferrari.

With the team now returning to the class, Ricciardello says that a new car is again a possibility.

“We’re sort of weighing up whether it’s worth building a new car at this stage,” said Ricciardello.

“We’ll have to wait and see how competitive the Alfa is when it hits the track this year.

“It was built in 1992, but we’ve developed it a long way obviously and it’s still pretty fast, so we’ll wait and see.

“If we do go to a new car we’d like to stick with something Italian. 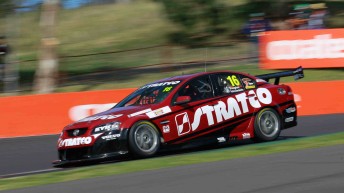 Ricciardello has not ruled out returning to Bathurst this season

“A Ferrari would be nice, but there’s no point spending $100,000 on the bodywork and not having any money left to build the rest of the car.

“With the current rules you don’t have to start with an existing car, but you need one to at least make moulds from – unless you go down the path that Kerry (Bailey) has and build it off of a model car, but then you run into a new set of problems.”

While not a full-time V8 Supercars driver in 2011, Ricciardello says he may compete in the Phillip Island and Bathurst endurance races, should the right opportunity present itself.

“We’re looking at all our options at the moment,” he said.

“We’ve spoken to a couple of teams. If we can get a good drive then I’ll take it, but otherwise it’s not worth it.

“I’m not going to go down the long road of being at the back of the field again.”

The Kerrick Sports Sedan Series will again feature on the Shannons Nationals bill in 2011.

See below for the 2011 Kerrick Sports Sedan Series calendar