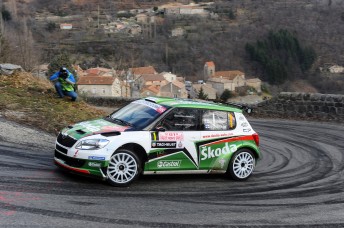 Juho Hanninen is the man to catch on the Monte

Driving a Skoda Motorsport Fabia Super 2000, the 29-year-old Finn was fastest on two of Wednesday’s four special stages, to head Freddy Loix at the overnight halt in Valence following a faultless drive.

The news was not as good for Australia’s Chris Atkinson who retired from the famous event just 700-metres into the opening stage with electrical issues. Atkinson’s Proton team-mate P-G Andersson went no further than stage two when he broke a wheel off his car hitting a rock seven kilometres into the stage.

“Everything was cool from the start, no dramas, warmed the tyres up, off the line, everything was good, then nothing,” said Atkinson.

“We were less than a kilometre in and the car stopped. The engine had cut and there was nothing, no electrics at all. We couldn’t start the car. I tried to fix it, but there was nothing we could do. 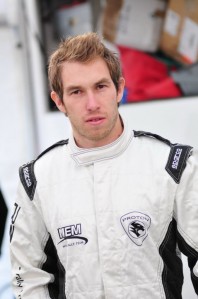 “The team have looked at the data now and the problem was caused by a voltage surge which blew the control box. This has never happened to us before in testing or anything, it’s an absolute mystery – but when things don’t go your way, they really don’t go your way.

“The frustration is that we had the engine working really well in the test, it was great. The performance is definitely coming. It’s actually a really unusual feeling on the event, this was the first time I’ve retired on the first stage of an event and been completely out of the rally.

“I’m not a huge fan of superally [the regulation permitting crews to re-enter events on the following day], but I really would have been today. It just seems such a waste that we’ve now got two perfect rally cars sitting here doing nothing; the fans would love to have seen the cars on the stages tomorrow and P-G and I would love to have been driving them.”

The stages in the Ardeche and Haute Loire regions of France were held in largely dry and bright conditions as the traditional ice and snow, that have been a feature of the event in recent years, didn’t materialise.

Hänninen has been consistently upping his pace on asphalt since finishing second on this event last season. He underlined that improvement with a staggering time on stage two, which was 15.1s faster than any other driver could manage. Hänninen gained the upper hand with a series of inspired tyre choices for the dry, albeit chilly, weather.

Le Mans 24 Hours racer Stéphane Sarrazin had set the pace on the opening stage from Le Moulinon to Antraigues in his Peugeot France 207 Super 2000. However, his switch from a medium compound tyre to the softer version for the Burzet-St Martial stage did not suit the dry stage surface and he dropped back with a handling imbalance, before losing further ground on stage three, St Bonnet Le Froid, when his car’s intercom system failed and he couldn’t hear co-driver Jacques-Julien Renucci’s instructions for seven kilometres.

Sarrazin’s delay enabled Loix to move into second. The Belgian Skoda driver would complete day one with the fastest time on the second St Bonnet Le Froid stage. Loix, who holds the record of IRC wins with a tally of six, admitted to making a slightly hesitant start but was otherwise satisfied with his performance.

WRC star Petter Solberg is third in another Peugeot after moving ahead of Sarrazin on stage four. The Norwegian said he was lucky to avoid a puncture when he slid wide on a right-hand bend on stage one and nudged a wall. He also suggested his lack of dry-weather running in his 207 was masking his true speed.

While the weather remained unseasonably mild, several drivers hit trouble on the demanding mountainous asphalt roads. First to fall was Andreas Mikkelsen, who was making his debut for Skoda UK Motorsport. The Norwegian driver’s challenge ended after four corners when he slid into a low wall on a right-hand bend, punctured his car’s left-rear tyre and damaged the suspension to the extent he was unable to continue.

Nicolas Vouilloz, tacking his first rally for 12 months, suffered a front-right puncture on stage one, as did Henning Solberg, who retired his M-Sport Fiesta as a result. Thierry Neuville crashed his Team Peugeot Belgium-Luxembourg 207 on the first stage.

Thursday’s action features two loops of stages run twice north-east of Valence and separated by a service stop in the city.