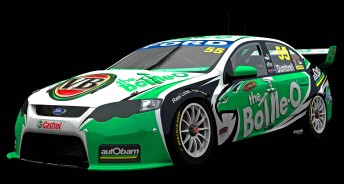 According to team principal Rod Nash, the images convey the team’s new livery, although there may still be some minor tweaks before the car hits the track for the first time at Eastern Creek next week.

“We were trying to have it finished by last Friday, but it’s still going on this week. We haven’t got much time to go.” Nash added that the team will not be conducting an official launch of the new 2011 livery, confirming that the car will be seen for the first time in its complete new colours as it rolls off the back of the Ford Performance Racing transporter for the January 29 test day.

“There’s no time for a proper launch,” he said.

“I think they’ll be a lot of wet paint on cars at the test in Eastern Creek!”

For more with Rod Nash (and to see more images of the 2011 The Bottle-O Racing livery), CLICK HERE for today’s Cafe Chat.