Four V8 drivers to get early look at Yas Marina

Four V8 drivers to get early look at Yas Marina 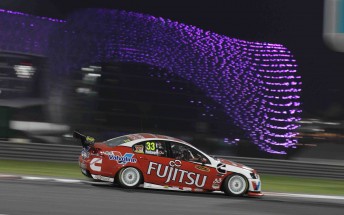 Four V8 Supercars drivers will get an early look at the Yas Marina Circuit over this weekend for a brief promotional tour ahead of the first round of the 2011 International V8 Supercars Championship.

The quartet will conduct media and photo opportunities, including a visit to Ferrari World, located next to the billion dollar Yas Marina Circuit.

Last year, Jamie Whincup, Will Davison, Mark Winterbottom and Paul Dumbrell participated in a similar publicity exercise before the opening round of the series.

Holdsworth, driver of the #34 Fujitsu Commodore VE, says that he is excited to be able to part of the exclusive visit.

“It’s very exciting for the four of us to be going over. Last year we spent a bit of time in Abu Dhabi, and that was fantastic, and now we get to do it again over a non-racing weekend,” he told Speedcafe.com.au.

“We’ll probably get to have a bit more of a look without having racing on our mind.

“Ferrari World wasn’t open when we went there last time, so that will be pretty exciting to have a look through – and hopefully have a go on that rollercoaster!

“And to be honest, the icing on top is that we get to go over in business class. Robbo (Caruso) and I are probably more excited about the plane trip than anything else! We’ve always been in ‘cattle class’, so this will be a new experience.” Courtney is also looking forward to checking out more of the Abu Dhabi landscape on a non-racing weekend, but the new V8 Champ has other things on his mind at the moment.

The Toll Holden Racing Team driver, who has resided in Queensland for the past five years, has linked up with his long-time personal sponsor Jeld-Wen to donate a large sum of cash to the flood victims in his home town.

While Courtney is expected to move south in the coming months to be closer to his new factory Holden team, Courtney and Jeld-Wen have dug deep, pooling together $25,000 for the Premier’s Flood Relief Appeal.

“The floods have been devastating,” Courtney said.

“Nigel Lapping (Jeld-Wen Australia Chief Executive Officer), my team, and I all wanted to do something and hopefully our donations will help.

“There is so much work to do. I’m fortunate because the floods missed the Gold Coast, but just up the road in Brisbane, and elsewhere, there are thousands of people and families struggling to get everything cleaned up.”

Courtney and Jeld-Wen’s flood donation is the second largest from the V8 fraternity, behind V8 Supercars Australia’s generous $50,000 pledge.

According to Queensland Police, the death toll due to the natural disaster is 20.