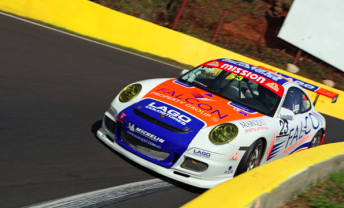 Lago, who will be paired with Matt Kingsley and David Russell for the 12 Hour, was forced to relocate his car from Wayne Park Automotive’s Milton workshop last week in order to avoid flood damage.

With the water having wreaked havoc with Park’s workshop, turning over a 800 litre oil tank, Lago said he was lucky to get his car out when he did.

“The boys put the car up on the hoist, and they were going to leave it on the hoist, then they realised that they better get it down when they were walking in water late Tuesday,” Lago told Speedcafe.com.au.

“Then they had to ring the hoist manufacturer to step them through how to bring the hoist down manually, because the council or government had obviously dropped the power.

“Luckily they did get it out on Tuesday. What they did leave behind, such as rotors, pads, an unassembled gearbox, radios… they put up in the second story and it all went under.”

Having been moved to Lago’s own workshop at Hemmant, the car is being transported to the Porsche Centre Gold Coast today, where final preparation will be undertaken for Bathurst.

Lago will run in Class B on the Mountain, against five other Porsches – three 997s and two 996s.

The Queenslander says he is aiming for a class win, but outright positions are too hard to predict.

“If it’s wet it might play into the 996’s hands with ABS, but we’ve got a good car with good horsepower and a great driver line-up, so we’re really excited about it getting up there and doing well,” he said.

“We’re definitely looking for a class win. With only 28 cars, it’d be nice to sneak into the top 10 outright. There are nine outright (Class A) cars, and you wouldn’t think all of them will make the finish.

“A 12 Hour event is so long, you can have the best prepped car and things can happen that’s out of your control.

“Like everyone says, we’ll have our target time, and we won’t try and win it in the first hour – we’ll just see what everyone else is doing and act accordingly.”

In other Bathurst 12 Hour news, the Rob Thompson / Jon Mills Lotus Exige S entry has been withdrawn from Class C due to the Queensland flooding.

The field will remain at 28 cars however, with Peter Conroy, Mark Brame and Anthony Robson lodging a late entry.

The trio will pilot the Mitsubishi Lancer Evo X that finished fourth in last year’s Bathurst 12 Hour and third in the inaugural Eastern Creek Six Hour.

Another change to the initial entry list (CLICK HERE to view) is the Paul Nelson’s Bezcorp Security entry. The team will race a VY model HSV R8, having originally been slated to run a Ford Falcon XR8.

Race organisers have also announced that the February 6 race will once again be streemed live on www.bathurst12hour.com.au.