Warrnambool is all set for a Classic

Warrnambool is all set for a Classic 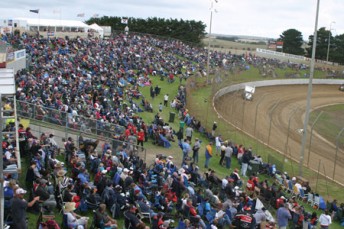 The town of Warrnambool in Victoria’s South West is set to come to life over the coming weeks with Sprintcar teams and fans set to take over the town.

Despite the flood warnings in the region, and rumours about the event already being sold out, Premier Speedway General Manager David Mills assures fans that the Speedway is not flooded and there are still thousands of tickets still available.

“The only things that have sold out are the Speedcafe Classic Marquee and the Standard Grandstand. There thousands of General Entry Tickets and Terrace Seats still available,” said Mills.

“To have people literally using Facebook and these other sites to inform people that we are sold out or flooded, when they don’t know the facts and are so far off the truth it is not even the slightest bit amusing.

“We may lose our overflow carpark on the Allansford side of the complex in Byron’s paddock due to the flooding of the Hopkins River, the Speedway carparks are untouched and we will be business as usual on the weekend.

“We will do everything we can to accommodate everyone and we simply ask for their co-operation with regards to parking.”

With three of the top five finishers in the 2010 World of Outlaws Series among the ten Americans on the 90-plus strong entry list for the 39th Annual Grand Annual Sprintcar Classic, the racing will be some of the best ever seen at the Sungold Stadium.

“We’ve been building for this event, and the following National Championships, for a while now and it is exciting to have so many Americans with such quality and depth coming here for the Classic,” said Mills.

With the National Championship being held at the venue the following weekend, the town of 25,000 people is set to swell dramatically for the week-long festival of speed.

“The week will kick off with the fan appreciation day on Saturday morning ahead of the Classic on Saturday and Sunday night. Then we have the Prelude to the Championships event on Wednesday and the Australian Championships the following weekend,” said Mills.

“There are a lot of interstate people who have pre-purchased tickets for all three events and everyone in the town is really gearing up for a great week.”