Vettel and Red Bull favourites for 2011

Vettel and Red Bull favourites for 2011 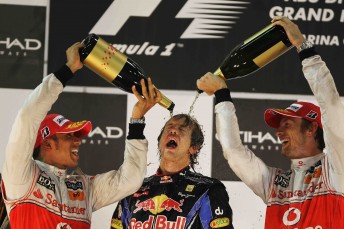 Sebastien Vettel and Red Bull Racing are favoured to defend their 2010 World Championships this season, according to Australian betting agency sportsbet.com.

The 2011 championship is again set to be a wide-open affair, with several significant rule changes potentially shaking-up the order established last season.

Key among the changes is a switch from Bridgestone to Pirelli tyres, the re-introduction of KERS, the banning of F-Ducts and double-deck diffusers, and the debut of driver-operated moveable rear wings.

According to the bookmakers, Sebastien Vettel ($3.50), Lewis Hamilton ($3.75) and Fernando Alonso ($3.75) are the clear favourites for the Drivers Championship.

Mark Webber and Jenson Button, the ‘second drivers’ at Red Bull and McLaren, follow at $11, despite the Australian winning four races, and the Briton providing more competition for team-mate Hamilton than many expected, in 2010.

Ferrari’s Felipe Massa, who came within a point of winning the 2008 World Championship, is listed just eighth at $17, after going winless last season.

Mercedes GP duo Michael Schumacher and Nico Rosberg are both paying $13, despite Rosberg outscoring the seven-time World Champion 142 points to 72 in 2010.

The bookmakers are not discounting Robert Kubica’s chances of taking the title – with the seemingly outside chance that the Lotus Renault GP driver will lift the crown paying just $21.

Williams are listed below Force India and Sauber, despite beating the pair in the 2010 championship, while the best of the new-teams last season, Team Lotus, sit equal with Toro Rosso – well clear of fellow 2010 debutants Hispania and Virgin Racing.

Official testing for the 2011 Formula 1 World Championship will commence on February 1 in Valencia, Spain.

See below for the betting odds taken from sportsbet.com.au