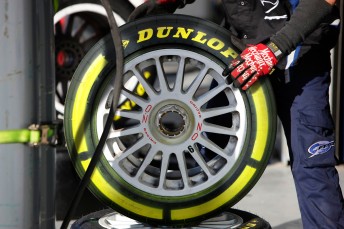 Two long sessions will be held at the western Sydney circuit – 9am-12.30pm on hard tyres, before Dunlop’s ‘Sprint’ tyres are allowed to be run in the afternoon session (2pm-5pm).

There will be no new tyres issued to the teams for the one-off test that is also serving as V8 Supercars season launch. Teams can only use rubber remaining in their tyre banks from last year’s season, as per regular testing rules.

Most V8 Supercars teams will have one (or possibly more) sets of soft tyres in their banks (some brand-new and some used), and while there are no championship points on offer, it should produce a interesting fight to be the fastest in the opening session of the season.

Tony D’Alberto, who will drive his #3 Wilson Security-backed Commodore VE at Eastern Creek, said that he has one set of softs in his bank and is looking forward to getting back onto the track.

“I have a set of softs, and I’ll be using them for sure,” D’Alberto said.

“I guess the key will be to use them at the right time to get the most out of them. We all want to go the fastest, and I know there’s no points on offer, but going fast is what we’re there to do.

“We’ve been out of the seat for sometime so I’m just looking forward to getting back in and getting on with it.”

Patrons at Eastern Creek will be able to keep up with the latest on track timing, although no sector times will be recorded.

The test session counts as one of the team’s allocated test days, so V8 Supercars Australia has been mindful of what the team’s need to get out of the day, while also keeping fans and media satisfied. Between the two sessions (12.30pm-1pm), fans will be invited onto the grid to get up close to the cars and stars.

The test will be held at Eastern Creek Raceway on Saturday, January 29.