Russell Ingall: 2011 is make or break for me

Russell Ingall: 2011 is make or break for me 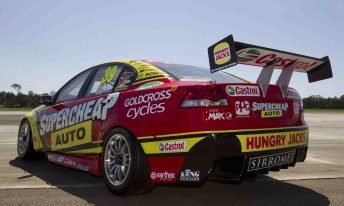 Russell Ingall is aiming to prolong his V8 Supercars driving career until the end of 2012, admitting he needs to excel this year to prove he can still cut it with the best in the business.

Ingall, the 2005 V8 Supercars champion, enters the 2011 season in the last year of his driving deal with Paul Morris Motorsport, but the veteran racer is looking to earn another season beyond this year in the sport – but he knows he’ll have to justify it.

At the launch of his brand-new Supercheap Auto livery on his Commodore VE, Ingall said that the 2010 season is “make or break.”

“This year could be make or break for me, so there will be no looking back,” said Ingall, who finished 12th in last year’s championship. Russell Ingall with his 2011 weapon

“As a team we have regrouped over the summer break and made some significant changes, so all the ingredients are in place for a great season and I won’t have any excuses.

“My game plan is to carry on through until the end of 2012 but I’m under no illusion that I have to perform and earn my seat.

“My focus is looking out the front windscreen and not in the rear vision mirror. I’m very much looking forward to the challenge of the new season and I can’t wait.”

The PMM team has recently been bolstered by the employment of a number of key staff, including former Triple Eight Race Engineering man Steve Robertson as team manager, plus experienced engineer Mark Fenning (former Jim Beam Racing) taking over as engineer on Ingall’s #39 SCAR Commodore.

Ingall will also have a tough team-mate to benchmark himself against, with Steve Owen slotting beside him in the #67 VIP Petfoods Commodore VE.

“Steve Robertson as team manager is great for PMM, he brings a winning culture with him so to have that sort of person steering the ship is a massive boost for us,” Ingall said.

“Mark Fenning comes really well credentialed and has plenty of experience working with Triple Eight equipment so to get him across to Supercheap Auto Racing is a coup for the team.

“Steve [Owen] also knows what it takes to win with these Triple Eight cars, so we’ll use his experience to our advantage as well.”