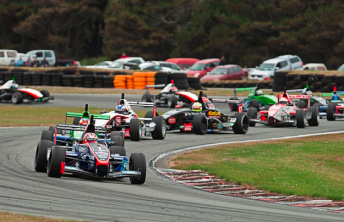 Sixteen year old Mitch Evans has begun his Toyota Racing Series title defence in impressive fashion by taking out the opening round of the 2011 season at Teretonga.

Evans lost the Race 1 victory on Saturday due to a gear selection problem that dropped him to second in the closing stages, before winning Race 2 on Sunday morning.

Englishman Alex Lynn won a wet reverse-top six Race 3 from German Mario Farnbacher, while third place for Evans was enough to seal the round honours.

It was a great comeback for Farnbacher, who was fifth for the weekend despite crashing heavily in the Saturday race.

Australian Scott Pye combined a Race 1 win with a fourth and a fifth on Sunday to be second overall. 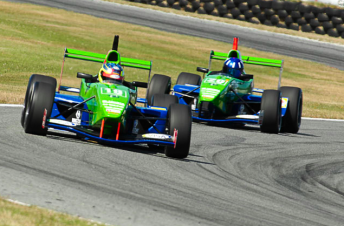 Evans was not the only New Zealander to impress at Teretonga, with Nick Cassidy ending the weekend one place behind Lynn in fourth.

Cassidy’s overall result came despite a 10 second penalty in Race 1 for being out of position at a Safety Car restart that dropped him from third to ninth in the final results.

Josh Hill, son of former Formula 1 World Champion Damon Hill, had a tough initiation into the TRS, retiring from Race 1 courtesy of a collision with Farnbacher, before spinning out of Race 2 while battling with Jamie McNee.

Another to find trouble was Australian Nick Foster, whose weekend began with a strong fifth place in Race 1, but ended with an off-track excursion in Race 3.

The 2011 Toyota Racing Series continues next weekend at Timaru.