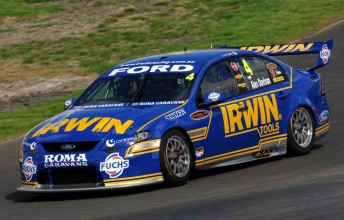 The man that almost steered Mark Winterbottom to a V8 championship will engineer Alex Davison’s IRWIN Ford Falcon this year.

Stuart had held the dual role of engineer and team manager in recent years, the restructure allows him to turn his focus to the team as a whole.

Kroehn, who cut his teeth in V8 Supercars working with Brad Jones Racing, has also worked at WPS Racing before joining FPR. He engineered Winterbottom to second place in the 2008 championship before being moved to Steve Richards’s Falcon. “It’s exciting to be with a new team,” said Kroehn.

“Stone Brothers Racing has won more V8 Championships than any other team over the last ten years, so they definitely know what to do.

“I’m looking forward to the year ahead with Alex Davison and IRWIN.”

Alex Davison is pleased about the new engineering structure and is looking forward to working with Kroehn.

“The changes that Ross (Stone) and David (Stuart) have implemented are terrific for the IRWIN side of the garage and the team as a whole,” said Davison.

“Firstly, Daniel (Kroehn) is obviously very experienced, he is a highly credentialed and respected race engineer, so not only am I confident that he can do a good job for us, but I am really looking forward to working with him.

“Secondly, it’s good for David Stuart because he will be able to concentrate on managing the engineering department and managing the team, which will benefit the whole team.

“It will enable him to do both of those jobs much more efficiently without having to engineer my car as well. There are positives all round.”

The first V8 Supercars test of the year is being held at Eastern Creek Raceway, near Sydney, on January 29.

The opening round of the 2011 V8 Supercar Championship season is in Abu Dhabi on February 10-12.