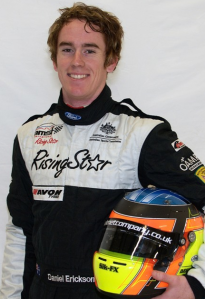 Daniel Erickson’s will not compete in the Daytona 24 Hour sports car race after his scheduled entry withdrew due to a shortfall in sponsorship.

The young Sydney international hope was invited to co-drive a Crawford-Chevrolet prototype for Bayer Racing in the January 29-30 classic, but the entry has been cancelled due to a lack of funds.

It is hoped that the disappoint of not competing in the classic 24 Hour race will not hinder the rest of his 2011 plans.

“Obviously I’m disappointed not to be going to Daytona, but no drive is certain until all the pieces are in place, which unfortunately didn’t happen this time,” Erickson said.

“Daytona was always an addition to my main aim for this year, which still is to compete in an internationally recognised ‘development’ openwheeler series.”

Erickson has just returned from a flying visit to the USA to discuss his future options with Primus Racing boss Jon Baytos.

Baytos ran Erickson’s successful 2010 USA racing campaign, in which he won Rookie of the Year and finished third overall in the F2000 Championship Series.

“Jon told me that he regretted having to pull the pin on Daytona, but he didn’t want to go there with an underfunded team.

“He has some exciting projects in place for 2011, and I hope to be involved in some way because he’s one of America’s leading team owners and we got on really well last year.

“But nothing can be confirmed until all the i’s are dotted and the t’s are crossed.”

Meanwhile Team Erickson’s fundraising efforts are ongoing, including a $29,000 Mega Prize Draw and a three-night holiday for two on Day Dream Island.