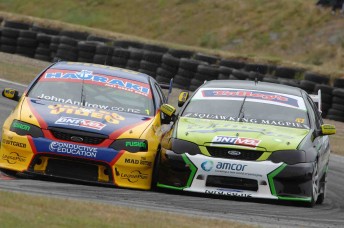 Craig Baird has taken Round 3 and the overall lead of the 2011 BNT V8s Championship after a consistent performance at Teretonga Park.

The United Video Falcon driver scored two second places and a third to win the round on points, in a day that began with a wet Race 1, and ended with the traditional full-reverse grid Race 3.

After an intense day of racing, the reigning BNT V8s Champion was already thinkining about Round 4 of the 2011 series, to be held at Timaru in just seven days time.

“The car may be more suited for Timaru next week as we were struggling in a straight line here all weekend,” said Baird.

“I know the car is working very well on corners so it was a good round but I’m still looking forward to Timaru.”

Scott (Fujitsu Heat Pumps Falcon) edged out Fogg (LG Falcon) for second in the round, and has recovered to third in the championship after a tough opening round at Pukekohe. “The highlight for us this weekend was that we had a good car in the rain which was our nemesis last year,” said Scott.

“A lot of hard work has paid off for us this weekend so I look forward to moving on to Timaru.”

McIntyre (Talleys Ford), who suffered a heavy crash and a disqualifcation at the opening two rounds, took his biggest points tally of the year despite being spun to the rear of the field in Race 3 by Simon Richards . The former champion recovered to 13th by the flag.

Earlier in Race 2, McIntyre had looked likely to take his second win of the weekend, but was passed by Scott and Baird on the way to an eventual third place finish. 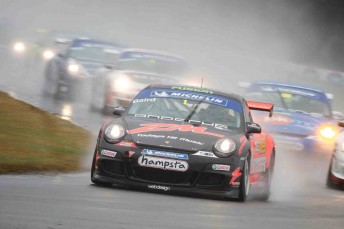 The results see McIntyre fourth in points ahead of Andy Knight – with Ford Falcons locking out the top five positions.

Australian V8 Supercars driver Jason Bargwanna had his best weekend to date in the Rock Energy Falcon, including a fourth place in Race 2.

Teenager Scott McLaughlin also had a strong meeting – taking three top ten finishes to move to ninth in the championship in his Supercheap Auto Commodore.

Baird’s winning weekend also extended to the Porsche GT3 Cup Challenge, where he overcame rival Daniel Gaunt to win two races and the round.

Gaunt, who won the opening two rounds of this year’s championship, took pole and the Race 1 victory at Teretonga, before a post-race time penalty dropped him from second to ninth in the Race 2 results.

Baird and Gaunt then charged through the field in the reverse top-six Race 3, with Baird winning from Jonny Reid, Gaunt and Paul Kelly, who benefited from a last lap off from Wade Cunningham.

Despite having his five-race winning streak ended, Daniel Gaunt retains a strong lead in the series points standings, heading to the fourth series round at Timaru next weekend with 606 points, 102 more than second placed Jonny Reid and 131 more than Baird, who has moved from sixth place to third.