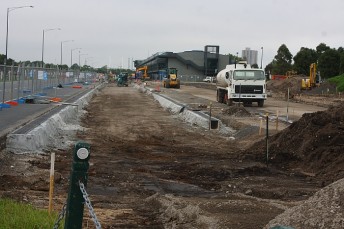 Work is underway on the new pitlane at Albert Park

Construction of the new dual pit lane at Albert Park is well underway ahead of next March’s Qantas Australian Formula One Grand Prix.

The new pit lane will feature two pit areas – the existing structure for the F1 teams, plus a new semi-permanent facility for the V8 Supercars.

In a deal announced in mid-2010, the V8 Supercars will compete in the ‘Albert Park 500,’ which includes a 200km race on Friday and Saturday, followed by a 100km finale on Sunday. The total prize pool for the event has been upped to $500,000 as an extra incentive for the non-championship races.

Construction workers have recently driven pylons into the ground for the pit lane, with the building of the foundations about to begin. New tarmac has been laid down between Turns 8 and 9

Other changes to the track include a new section of bitumen up the back straight, heading into Turn 9.

The V8 Supercars pit structure will also cater for an increased number of corporate guests along pit straight.

Other support categories include the first round of the Australian Carrera Cup Championship, Formula 5000, and the Lexus Celebrity Challenge featuring hybrid cars.

The Qantas Australian Formula One Grand Prix is the second round of the 2011 Formula 1 World Championship, running between March 24 and 27.