Tyler Greenbury to lead Intrepid in 2011

Tyler Greenbury to lead Intrepid in 2011 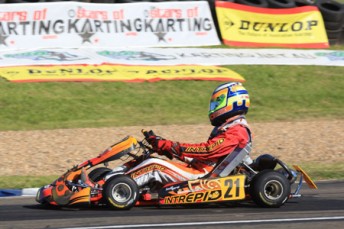 Tyler Greenbury will lead the way for the Intrepid Australia team in 2011. Pic: Cooper's Photography

Toowoomba young gun Tyler Greenbury will spearhead Intrepid Australia’s campaign in the major karting events across the country in 2011.

In a year that will see a wide variety of European kart brands hitting Australian circuits, many for the first time, Greenbury will fly the Intrepid flag in the CIK Stars of Karting Series and also the Rotax Pro Tour.

Greenbury, a long-time driver of the famous European Tony Kart brand, will have his first event of 2011 later this month in Melbourne at the opening Rotax Pro Tour event in the Rotax Light category. He will then contest next month’s opening round of Australia’s elite series, the CIK Stars of Karting Series alongside team-mate Hayden Jackson in the highly competitive Pro Gearbox (KZ2) field.

“We’ve been doing some testing recently and the new 2011 Intrepid KZ2 chassis has got us excited and I’m confident that it is a great package to be battling for wins throughout the year,” said Greenbury.

“As with 2010, the CIK Stars of Karting is a great opportunity to get out on track and mix it up with the very best from the sport.

“I’m really looking forward to the whole series and what will undoubtedly be awesome racing and a big highlight of my racing year.

“We have big expectations for the year and I have a great supporting team which includes my family, Brian Hicks from Bolt Pro, Intrepid, Kaos Karting and Graham Armstrong engines.”

Gold Coast-based youngster Zane Goddard is also planning a big year having stepped up from Midgets to Rookies in 2010 and gained additional experience competing in an international field at the Yamaha SL International in Kuala Lumpur.