Stewart released – but problems not over?

Stewart released – but problems not over? 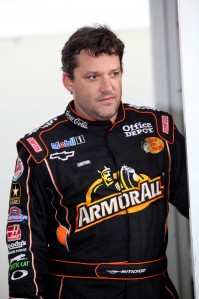 Tony Stewart prior to all the drama at Sydney Speedway last night. Pic: Paul Carruthers

US NASCAR star Tony Stewart has walked free after being arrested by local police at the Sydney Raceway last night, but his troubles might not be over just yet.

It is understood that Stewart was free to fly back to the US today with fellow US star Donny Schatz, but that further investigations of an alleged assault between Stewart and Sydney Raceway co-owner Brett Morris are on-going.

It is believed that Morris, while talked to at the scene of the alleged incident last night, is yet to be formally interviewed. If Morris is interviewed and it is found that Stewart has a case to answer, there is a chance that the two-time NASCAR Sprint Cup Champion may be required to return to Australia for court proceedings.

Such a situation could be extremely damaging to his 2011 Sprint Cup campaign in which he owns a team that is expected to challenge for the title.

The story broken by Speedcafe.com.au in the early hours this morning has resulted in international media interest with enquiries coming from around the world, obviously led by the major agencies in the US. It is believed this incident led to an altercation between the crews of James Thomson and Craig Dollansky last night. Pic: Paul Carruthers

“The 39 year-old man was released by police without charge, pending further investigation.”

Sydney Speedway General Manager, David Lander had little to say about the incident, shrugging off the incident as basically a “tiff” between two drivers.

“It is a matter for those two guys (Stewart and Morris),” said Lander.

“It was a Ruckus in the pits between two drivers. It happens.

“There is no more that I can say or I am prepared to say.”

It has also come to light that there was at least one other “incident” in the Sydney Raceway pits last night between the crews of NSW driver James Thomson and visiting US driver Craig Dollanksy. It is believed that several members of both teams were interviewed by police after an alleged fight that was spurred by an on-track clash between the two drivers. It is believed no charges were laid from this incident.

Speedcafe.com.au will provide more information on this on-folding story as it comes to light.