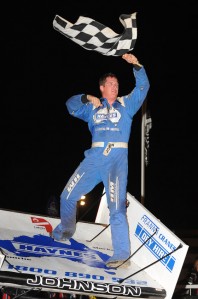 Motorsport is full of emotion, drivers, teams and fans continually ride the highs and lows of the sport – none more so than American Jason Johnson.

Almost seven years ago to the day Johnson was racing in Australia when he received a phone call advising his younger sister, Kayla, had been seriously injured in a road accident.

Unable to get on a flight home until the following day, Johnson drove the Disbury Family Racing entry in the final round of the World Series Sprintcars Series – and drive it he did.  Johnson set the fastest time in qualifying, was the top pointscorer after the heat races, secured pole position for the main event and led every lap of the feature.

Those who were in attendance on January 17, 2004 saw scenes of emotion they thought would never be replicated.

Johnson flew out the following morning to see his sister who was on life support, but unfortunately she passed away while he was on his way.

Almost seven years to the day, the emotional scenes were repeated last night in Adelaide with Johnson taking out round 12 of the 2010/2011 World Series Sprintcar Championship.

Johnson set the third fastest time in qualifying before securing pole position in the shootout aboard the Haynes Labour Hire-backed entry.  Driving with a heavy heart in honour of his sister, Johnson paced the field and appeared on route to victory in the 30-lap main event.

Just like his victory in 2004, Johnson had to endure a late race caution and at the restart with three laps remaining he had Robbie Farr on his tail – an identical scene from seven years ago.

Fighting back his emotions Johnson drove three perfect laps of the Speedway City bullring to take the victory.

“This is a really difficult time for me, seven years ago I lost my little sister when I was out here and it has been really tough,” said Johnson.

“I had to race here that night because I couldn’t get a flight home until the following day so I raced for her before heading home, by the time I got to LA she was gone, so I didn’t even get to say goodbye…my sister means a lot to me.

“I’ve a lot of good friends over here, people who I Bobbi (Johnson’s wife) and I class as family.  There were a lot of people that rode that night with me seven years ago that were here tonight.

“She really looks down on me like an Angel and I felt as though she was riding along with me tonight.”

Fastest qualifier Warrenne Ekins finished fourth ahead of Robbie Farr, who lost out in the final few laps to drop three spots in three laps.